As a child in Colorado, I have a distant memory of finding a nugget of pure gold, bigger than the tip of my thumb. I instantly became the richest kid in America! I thought I could buy a husky (with a sled) and a Tama Starclassic Birch studio set with a full range of Paiste cymbals, and maybe a house or three. I could move out on my own, I could—so many expectations; so many promises.

The disappointment! All those things to which I was looking forward disappeared, and the lump of cold angles suddenly seemed a reminder of what could have been.

I have recently had a similar experience with some fools coffee.

I was asked by Miele to trial a high-end coffee machine for three weeks, and give an honest account of what I found. I was thrilled, since the last time I got to play with a 5-figure espresso machine was during uni working as a barista. I built up a few images in my mind; imagining pulling perfect shots of central-american Cup of Excellence blends, practising my crema, and tasting half a dozen different coffees to see which worked best with the £1,000 set up. My interest was only piqued further when a colleague at work described Miele as “the Rolls Royce of appliances”. 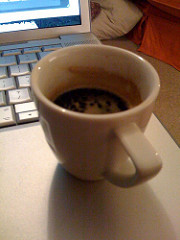 About three weeks ago, a courier arrived as I sat working from my home office. He delivered a box big enough for a springer spaniel to sleep in, and heavy enough to make the manly nonchalance I affected while carrying it away from the door quite difficult indeed. Nonetheless, I left the box packaged and wrapped up in the hall until the evening, looking forward to the reward of an espresso or six after work.

As I worked my way through the layers of packaging, I gradually unveiled a stainless-steel, microwave-like appliance that dwarfed anything else my kitchen held, except—just—the oven. I scanned the quick-start guide and with a single word, my expectations instantly disappeared: “nespresso”. I lost the will even to unpack and set up this monstrously-large contraption.

Nonetheless, I did set it up, removing all of a counter-top from usable space. My disappointment, if anything, grew as I laboriously set up the menu through an achingly-complicated process involving the use of arrow buttons and “OK” to calibrate a dizzying array of possible settings. Throughout the next two hours, I played with settings, opened all the openable compartments and tried several of the coffee suppositories. My thoughts follow:

The Miele CVA3650 is a giant appliance which costs £1,000 (c. $1400). It looks impressive, with a stainless-steel finish and various accoutrements, including backlighting, obviously included as talking features. It would not feel out of place in a posh flat in Kensington—fitting in like an addition to a designed suite of expensive appliances. Indeed, the lasting impression is of a lifestyle rather than coffee. Browsing the Miele site, I found many photos of kitchens, appliances, and artfully-arranged mugs sometimes held by comfortable, rich-looking models. The only thing missing from these photos?

Nespresso tastes worse than I thought it actually could. I’m not saying that to be snobbish about my coffee, and I was genuinely curious to know what the little, coloured “pods” could produce. The result of every single “brew” was a flat, metallic, suspension of frankly disgusting, tepid liquid. Some aspect of the extraction produces an interestingly-contrived crema every single time, so the drink (I can’t call it coffee) certainly looks impressive. My wife recoiled after the first sip, and I left more than one completely untouched. The terrible “flavia” machine in my office makes better-tasting coffee than this!

The Miele machine is touch-button automation at it’s most falsely economic (time-wise). Sure, it’s convenient to press a button and have an espresso (ahem!) within 30 seconds, but that does not account for the half-hour (no joke) of programming every time the machine is re-plugged back in. I’m afraid I’m green-conscious enough to flip the switch at the wall after every brew, so this makes it ridiculous to use. The menuing system is cumbersome enough to make my eyes water. Two arrows, and “OK” to make every selection. It takes a huge amount of patience, and its… just… aweful! So many features, so few necessary or even useful. You can, for example, programme 9 different “user profiles”. Why? It’s a pod of shite coffee, which will taste EXACTLY the same, no matter which button you push. Why go through dozens and dozens of beeps in order to have a user-specific nescafe?

The only part of this machine which is convenient, is the actual making of a drink. For that, it is fast! It produces a of your choice (out of 5 different capsules) very rapidly (provided it’s been programmed and has already been switched on, obviously.) It will then automatically rinse itself, and let you make another soil infusion very rapidly. You only have to remove the spent capsules periodically from a tub within the machine, and fill up a water reservoir whenever it’s low (though, this is fairly frequently, thanks to the rinsing).

Before writing this post, I sent Miele’s representatives a quick heads’ up, with a brief summary which I think works well.

I understand its premise of being a super-convenient means of having a sophisticated-looking hot beverage, but I much prefer my coffee to be tasty, regardless of time. And the amount of time spent scrolling endlessly through menus isn’t really conducive to suiting busy people like myself as a domestic coffee machine. [in reply to the statement that it might prove to be] I’d be much more likely to advise people invest in a cafetiere, grinder and decent beans. For the £1,000 they could have spent on this, they could have many scores of kilos of excellent, locally-roasted, hand-sourced beans, and enough left over to send a thank-you bottle of single malt to the coffee roaster.

We value your memories.

Facebook shows me. Photos of old friends I’ve not seen in a decade, or more. It tells me people who don’t know me from Adam

I was 15 when they started school-shooter drills.

A few days ago, I wrote this piece on Facebook in response to a Business Insider article about the riots at Capitol Hill on 6th

Just_type. No editing. Full-on whatever the hell comes out of the fingers goes on the screen. (I’ve not done this in a while). Sorry. Sorry

Last week, I posted a Facebook announcement to a group of woodworkers that I administer. The post reiterated our inclusive stance and made it explicit

We value your memories.

Facebook shows me. Photos of old friends I’ve not seen in a decade, or more. It tells me people who don’t know me from Adam

I was 15 when they started school-shooter drills.

A few days ago, I wrote this piece on Facebook in response to a Business Insider article about the riots at Capitol Hill on 6th

Just_type. No editing. Full-on whatever the hell comes out of the fingers goes on the screen. (I’ve not done this in a while). Sorry. Sorry